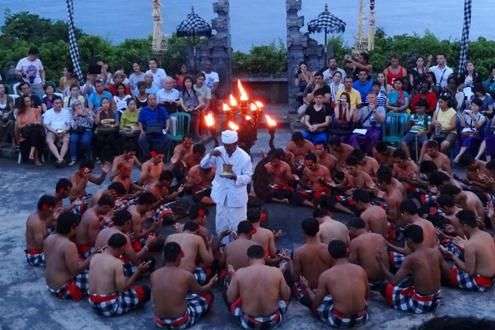 Kekak is an iconic Indonesian dance featuring hypnotic music and drama. The performance consists of a large circle of some 150 people chanting, moving their arms and body in repeated patterns. Taking place in the Hindu temple of Uluwatu, the dance is representative of the battle between Prince Rama and the evil King Ravana.

Whilst Kekak does have an ancient past, the dance you see today has very much changed since the colonial influence in Indonesia. In the 1930s, it became the focus of western fascination and the dance changed from being a ritual ceremony to the large performance you see today .

It's a fascinating example of how two different cultures interact and evolve together becoming something entirely new.

Map centered on Watch a Kekak Dancing Ceremony. Zoom out to view other hotels (H) and experiences (E) in the area.